Where is Emmaus Road?

“You can’t get there from here!”

Perhaps you have already done a quick search on your phone to find Emmaus Rd. If you ask a cab driver to take you to Emmaus Road in the Bronx, I guarantee you He is not going to find it. That is because Emmaus Road is not a street in the Bronx. The road which our church gets its namesake from is a Roman road which was travelled during the first century A.D. It ran down the slopes of Jerusalem toward the Jordan River and through the small village of Emmaus. Upon this road of antiquity an extraordinary encounter transpired. 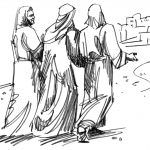 It was upon this dusty Judean road that two downcast men made their journey. Presently a stranger joined himself to their company and proceeded with them. Immediately, the newcomer could sense that something was troubling these two men. Bluntly, he asked what was wrong.  The men explained that Jesus, whom they had thought would be the savior of Israel, had been crucified and buried three days prior. Their hopes had been completely dashed, and yet that very morning there had been reports from some of Jesus’ closest friends that his tomb was empty and that He was alive. That seemed too fantastic to be possible and thus they were trying to figure out what such reports could mean.

After listening quietly to the entire account, the stranger sternly rebuked them for their lack of faith and began to instruct from the Scriptures. Beginning with Moses and proceeding through the prophetic books of the Old Testament, this man explained why it was necessary for the Messiah to suffer and die before resurrecting and entering into His glory. He left nothing out and brought all of the loose ends together to show that Jesus was indeed their Messiah.

Evening was fast approaching by the time the stranger’s explanation was wrapping up and the two begged him to join them for supper and stay the night. As they sat, the stranger blessed the meal, broke the bread, and began to give it to them. At that moment, the travelers recognized the true identity of their guest.  As they understood who He was, He miraculously disappeared before their very eyes. In their excitement, the two men proclaimed, “Did not our heart burn within us, while he talked with us by the way, and while he opened to us the scriptures?” Immediately, the two men retraced the seven miles back to Jerusalem to share with the rest of the disciples that they had had a personal encounter with the risen Jesus!

Why Emmaus Road then?

Ben Hamilton pastors Emmaus Road Baptist Church in the Bronx, New York. His passion is knowing God's will for his life, and sharing what he has learned with those whom he meets. He has lived in NYC since 2010. Ben is married to Andrea, and they have sevenchildren.

Andrew Murray calls prayer the “pulse of the spi

Free coffee outside the church today!

Rehoboth means “room.” How does this word have

From our ladies Bible study this morning…to dire

We hope you have already made your plans to join u

“There is no such thing as unanswered prayer fro

For unto us a Son is given, that we might be forgi

Hail the heaven-born Prince of Peace! Hail the Sun

Christmas won’t be on a Sunday again for 11 year